Typography means the style and appearance.

Have a look at the image for reference 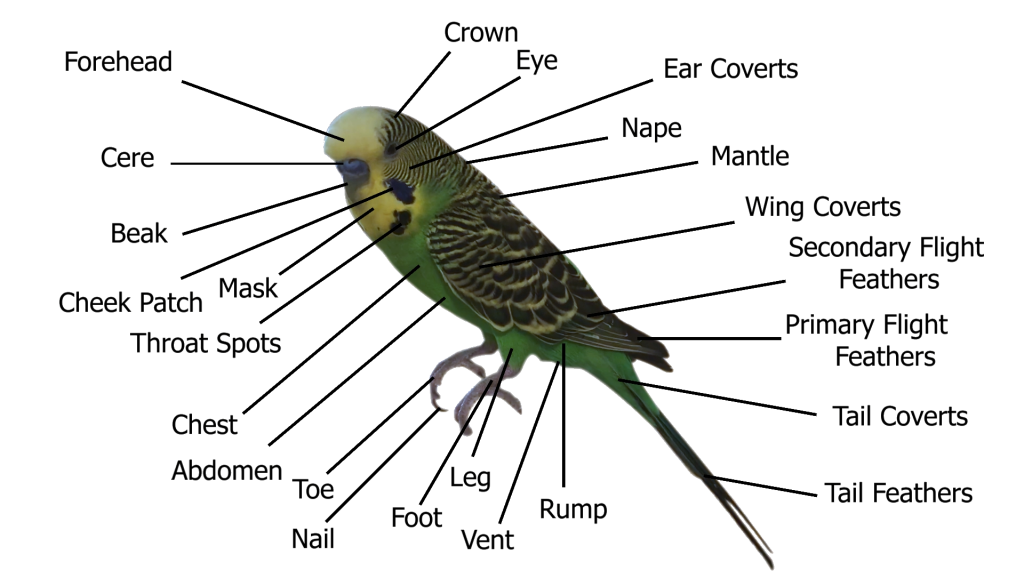 It is important to note that beaks are covered with skin.

This skin contains a substance called keratin, which is made of the same material as feathers, hair and fingernails.
that’s why the beak needs to be preserved and trimmed by the bird, or otherwise it will grow long and would cause problems.
Although cuttlebone and natural branches are usually enough for your bird to trim its beak, but if it grows longer than normal, it might be due to disease, and you should consult your avian vet.
The keratin that is produced by the bird’s beak dries and condenses to make it hard and durable.

The beak is made of two parts.

Because of keratin, the beak has blood vessels and nerves which makes it sensitive.

They are the 2 visible holes in the cere, and if they are not clean, your bird might be sick and need a medical attention.

It is the area above the beak surounding the nostrils and made of tough skin,
the color and smoothness of the cere depends on the budgie’s age, gender and mutation.

It is the budgie’s face below the beak. it is either white or yellow.

The cheek patches are the triangle shaped patches of violet, grey or silver feathers below the eye on the cheek.
These are important factor for budgies to show their beauty, and attract mates.

The round (usually black) spots at the base of the mask.

It is the area above the cere, and it is one of the main feature you can tell, if your budgie is below 4 months or not.
and the reason behind that is because young budgies have bars on their forehead but at around 4 months they lose these bars in their first molt.

You can see the bars in adult budgies, only on the crown which is the area that follows the forehead.

young budgies will have their bars extend further to cover the forehead as well.

The feathers that cover the budgies ear.

The upper front part of your budgie.

The Lower front part of your budgie.

Both the chest and abdomen can be white, yellow, green, blue ,grey, violet or any mixture of these together depending on your budgie’s variety.

It is the back of the neck, between the crown and the mantle.

It is the area of feathers in a triangle between the top of the budgies wings.

The feathers covering the wings.

The feather assisting in flight, the primary feathers are the ones you clip if you want to prevent your budgie from flying.

The skin covered part that extends from the budgie’s body to its foot.

Located at the end of each toe , and one of the reason we keep advising people to have multiple perches of different thickness to keep your budgie’s nails trimmed.

Basically it is the budgie’s bottom, also called cloaca.

It is a single whole that expels all waste, and for mating and egg laying.

These are the shorter feathers at the base of the tail.

These feathers assist in flight and balance.

Any cookies that may not be particularly necessary for the website to function and is used specifically to collect user personal data via analytics, ads, other embedded contents are termed as non-necessary cookies. It is mandatory to procure user consent prior to running these cookies on your website.